What is the prostate?

The prostate is a gland about the size of a chestnut in the male reproductive system. It surrounds part of the urethra—the tube that empties the bladder—just below the bladder and above the muscles of the lower pelvic area. 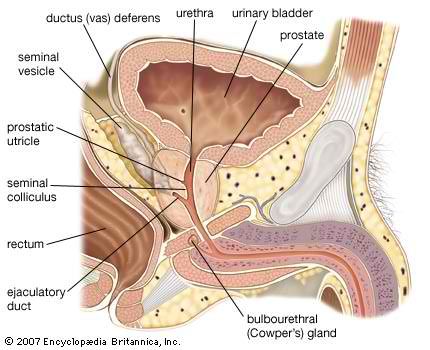 The prostate is responsible for the production of fluid that makes up semen when combined with sperm cells from the testicles and fluids from other glands. These fluids come together in the urethra and allow the proper function of the sperm cells, which are responsible for the fertility of men. The muscles of the prostate play an important role in reproduction, as well, ensuring that the semen is forcefully pressed into the urethra and expelled outward during ejaculation.

In the United States, prostate cancer is the third leading cause of death in American men, behind lung cancer and colorectal cancer. About 1 man in 39 will die of prostate cancer.

Prostate cancer can be a serious disease; however, most men diagnosed do not die from it. In fact, with the help of advanced testing, more than 2.9 million men in the United States who have been diagnosed with prostate cancer at some point are still alive today.

In 1994, the risk of dying from prostate cancer decreased with the Prostate Specific Antigen screening test (PSA), which measures chemicals in the blood. The blood level in PSA is often elevated in men with cancer.  Men who report prostate symptoms often undergo PSA testing to help doctors determine the nature of the problem.

If a man who has no symptoms of prostate cancer undergoes screening and is found to have an elevated PSA level, the doctor might recommend another PSA test to confirm the original finding. Should the PSA level remain high, the doctor may recommend that the man continue with PSA tests regularly to watch for any changes over time.

When a man’s PSA level continues to rise, the doctor may recommend additional tests to determine the nature of the problem. If prostate cancer is suspected, the doctor will recommend a prostate biopsy.

Prostate cancer has a long induction period, with many men beginning to get incipient lesions in their 20’s and 30’s. Symptoms increase as age increases, peaking at 78.

The risk of prostate cancer increases with the following factors…

Cancer isn’t the only issue that can affect the prostate. There are a number of prostate health problems that can become an issue as men age.

BPH develops when the prostate gland becomes inflamed or enlarged as men age. The prostate compresses the urethra. This makes it difficult to urinate, which then increases the chance of a bladder infection. Hyperplasia refers to the increased cell growth that begins in younger men, and slows through life. BPH is caused by hormonal changes, zinc deficiency, and deteriorating blood vessels. It is strictly age-related, starting at around 40 years old. Most men never see a doctor or need any treatment.

Is a significant health problem with prevalence rates of 11 percent to 16 percent. It is an infection or inflammation of the prostate gland that can be painful, eventually leading to problems with sexual dysfunction and urination problems. Some have reported symptoms such as fatigue and depression. Prostatitis is the most common reason for men under the age of 50 to see an urologist, as it most often affects young men to middle aged men.

Vitamin E works as an antioxidant, which protects the cells from damage. The Journal of the National Cancer Institute reported a 32% decrease in the incidence of prostate cancer in participants receiving 50 milligrams of Vitamin E for 5 to 8 years.

Vitamin D should be a priority for men of all ages. The Boston University School of Medicine found an association between decreased sun exposure or a vitamin D deficiency and the increased risk of prostate cancer.

Selenium is a mineral found in soil and known for its antioxidant properties. It carries a number of benefits, one being its ability to increase immunity and reduce the risk of cancer: “200 micro-grams of selenium a day led to a 67% reduction in prostate cancer” (Dr. Axe).  Foods like Brazil nuts, Yellowfin tuna, Halibut, cooked, Grass-fed beef, Turkey, Beef liver, Chicken, Egg, and Spinach are all loaded with selenium.

Zinc plays an important role in prostate health. Infection, stress and diet influence zinc levels, which are greatly reduced in those with prostate problems.

Saw Palmetto can improve symptoms of benign prostatic hyperplasia and prostatitis, which is why it’s one of the most commonly consumed supplements by men with prostate health issues.

Stinging Nettle has anti-inflammatory, anti-tumor and antiviral effects. It also boosts immunity and relieves symptoms of BPH due to the compounds it contains, such as phytosterols, lignans and polysaccharides.

Rosemary is a powerful antioxidant, and it’s believed that the molecular mechanisms of carnosic acid and carnosol may inhibit prostate cancer.

Frankincense is well-known for its ability to reduce pain and inhibit the spread of cancer.

Myrrh is known to have anticancer and antibacterial benefits. It also can be used to relax the muscles, which can be helpful when dealing with an enlarged prostate.

High Consumption of Meat and Dairy:

Research has shown that high amounts of calcium increase the risk of prostate cancer. This may be due to the calcium intake suppressing levels of vitamin D, which exhibits anticancer properties. Large amounts of meat intake can affect hormone profiles, as well as have carcinogenic effects when cooking the meats at high temperatures.

Prostate health problems affect 90% of the male population by the age of 70.  With diet and lifestyle changes, you can reduce the risk of developing prostate health issues. If you’re already dealing with some of these problems, there are alternative treatments that can help reduce inflammation, fight prostate enlargement, and inhibit the growth of cancer cells. Remember: it is always important speak with a health professional before seeking any form of alternative medicine.  Let them know your plans and how you intend to implement the treatments into your daily routine.

Nuview Nutrition is equipped to help you with a customized plan for your needs. Give us a call today to receive the help you are looking for! 248-625-5143.